The height of summer when pastures are supposed to be green and lush, instead brought brown and stunted. The growing season was marked by drought. Day after day went by without a cloud in the sky until August. The pasture grasses are shorter than usually this fall, as cows were shifted and moved, moved and shifted from one smaller pasture to another in an effort to best utilize the grass available. 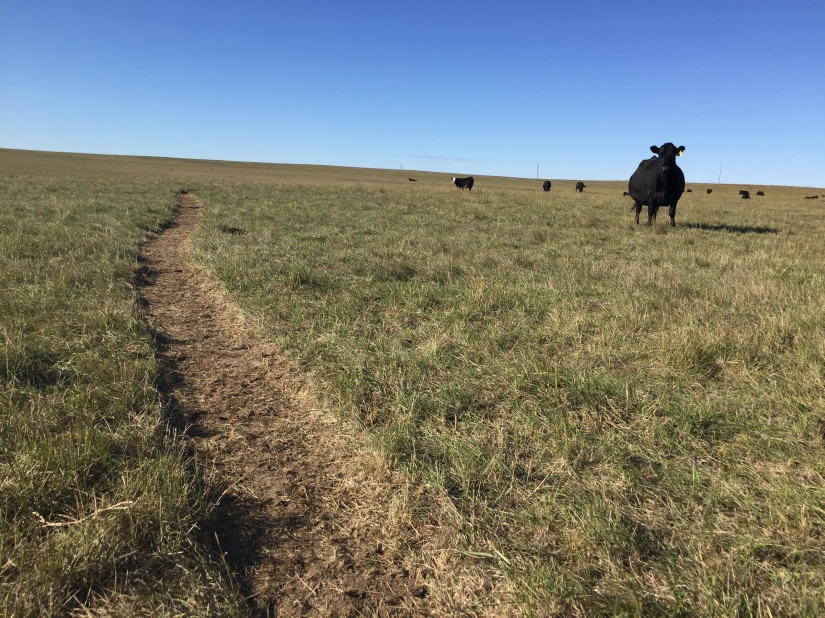 Highlighted across the short grass pastures are trails, meandering dirt paths taking cows from one desired location to another. From shelter behind the trees to the water tank. From one gait to the next. It got me thinking….why is the path in this location? Our main pastures are fairly level with little terrain to re-route a developing trail. Why does every single cow and calf follow this exact path enough to wear it down to dirt and then a rut, forming a narrow foot wide path?  Why do they meandor like they do? Is not the fastest way to get from Point A to Point B to follow a straight line? 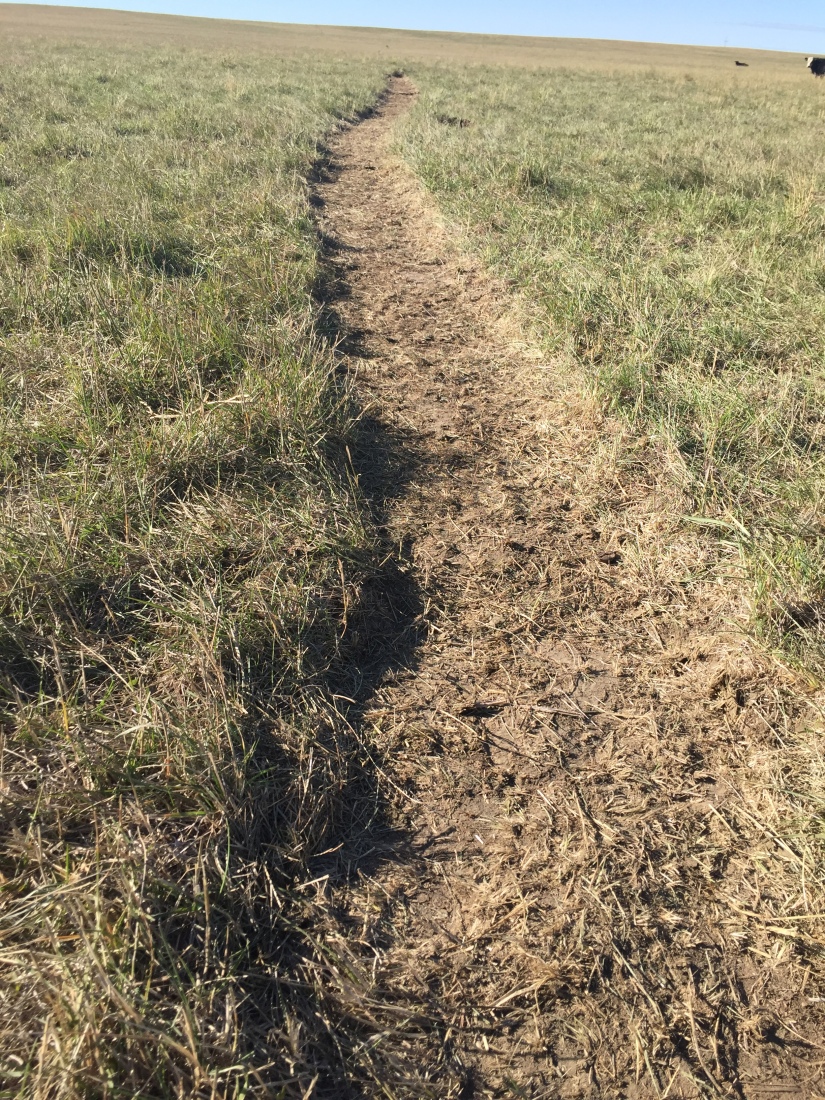 Turns out a lot of other people have spent some time thinking about cow paths. In fact there is a myth that the aimlessly meandoring streets of Boston were simply paved cowpaths. This myth has been debunked and shifted more towards the failure of human’s in their city’s planning. But interesting none the less to think of cow paths forming our major transport system. 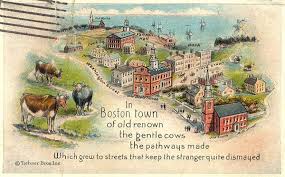 Researchers (Ganskopp, Oregon State University) have used GPS and GIS to investigate cow paths even further. They found that in areas of concentration, say around a water source, the paths actually braided together. Two or three intersecting trails with a common destination would occur within yards of each other as groups of cattle moved to and from. Cattle prefer to follow major drainages within a pasture. It makes sense they would parallel them but not travel the lowest point where the ground may be rockier and more rugged. They preferred lower elevations and just like us, most didn’t like to hoof it straight up and down a hill but would transverse at an angle across it. Cattle may take a steeper, more rugged approach to a desired destination but prefer a gentler incline and path away. Turns out is rarely the same path to and from the desired destination.

When you see a horse lope or run across a pasture it is this awe-inspiring marvel at nature’s grandeur. When you see a cow or sheep run across a pasture it is a much more utilitarian image. Sheep and cows are prey animals so flight seems a nature response so while utilitarian in appearance it is quite effective. If the need arises, it is amazing how quickly and athletically a cow can transverse rough terrain. Without threat or encouragement they are more content to put their head down and follow.

In business, there is the “Cow Path Theory”. The idea that one cow has created this path and each and every cow thereafter follows mindlessly, without thought of threats or the potential for a more efficient pathway. There is no challenge of the winding path as the cow plods along with its head down.  The idea translates to the business where the original management creates a pathway for business efficiency and management and employers to follow mindlessly follow with failure to evolve.

Sam Walter Foss paints a picture of pastoral life but challenges us to move off the path of repitition and familiarity. Do we accept our path without challenge because it was set forth for us? Do we do things “that way” because “that is always how it has been done”. Do we problem-solve, question, challenge, find new solutions to old problems or challenge our every day hum-drum, the head down “cow path” of our every day.

For men are prone to go blind

Along the cow paths of the mind.

One day, through the primeval wood,
A calf walked home, as good calves should;
But made a trail all bent askew,
A crooked trail, as all calves do.

Since then three hundred years have fled,
And, I infer, the calf is dead.
But still he left behind his trail,
And thereby hangs my moral tale.

The trail was taken up next day
By a lone dog that passed that way;
And then a wise bellwether sheep
Pursued the trail o’er vale and steep,
And drew the flock behind him, too,
As good bellwethers always do.

And from that day, o’er hill and glade,
Through those old woods a path was made,
And many men wound in and out,
And dodged and turned and bent about,
And uttered words of righteous wrath
Because ’twas such a crooked path;
But still they followed — do not laugh —
The first migrations of that calf,
And through this winding wood-way stalked
Because he wobbled when he walked.

This forest path became a lane,
That bent, and turned, and turned again.
This crooked lane became a road,
Where many a poor horse with his load
Toiled on beneath the burning sun,
And traveled some three miles in one.
And thus a century and a half
They trod the footsteps of that calf.

The years passed on in swiftness fleet.
The road became a village street,
And this, before men were aware,
A city’s crowded thoroughfare,
And soon the central street was this
Of a renowned metropolis;
And men two centuries and a half
Trod in the footsteps of that calf.

Each day a hundred thousand rout
Followed that zigzag calf about,
And o’er his crooked journey went
The traffic of a continent.
A hundred thousand men were led
By one calf near three centuries dead.
They follow still his crooked way,
And lose one hundred years a day,
For thus such reverence is lent
To well-established precedent.

A moral lesson this might teach
Were I ordained and called to preach;
For men are prone to go it blind
Along the calf-paths of the mind,
And work away from sun to sun
To do what other men have done.
They follow in the beaten track,
And out and in, and forth and back,
And still their devious course pursue,
To keep the path that others do.

They keep the path a sacred groove,
Along which all their lives they move;
But how the wise old wood-gods laugh,
Who saw the first primeval calf!
Ah, many things this tale might teach —
But I am not ordained to preach.