Last month was school picture time. We can all remember school picture day… my sisters and I seemed to have a knack for picking the trendiest, least timeless outfit from our closets (think puffy paint sweatshirts, Hypercolor, Garth Brooks style western wear with lime green Roper jeans that served as a bra in addition to their function as jeans, and the list goes on).  The Little Cowboy didn’t really get all that excited about “Picture Day”…it was just another day where it just so happens your likeness will be preserved for all entirety only to re-appear in a high school graduation slide show. He picked his outfit and we tried to make sure his hair wasn’t sticking up.

One of his little classmates brought pictures of herself to share with the class. He quickly declared that he wanted to share pictures too… great… we can cut up this little 1×2″ school pictures where he was positioned just so, with his shoulders off-center to the camera and his smile as awkward as can be. But no, those photos would not do.

In more of a senior photo shoot style, he had plans to share photographs that expressed who he was and what he loved. The instructions were laid out… he needed his pony for these photos. Every good cowboy needs to showcase their horse. He would borrow a toy gun with sound (even though it was a still photo and not videography) from his Grandpa. He had his rope, saddle, chaps, cowboy hat, and vest. He was a cowboy not of the Country Music Signer era with rhinestoned back pockets but of the Old West, where grit not glitter defined a cowboy. I learned this summer when we visited the Range Rider’s Museum in Montana (this kid’s Disney Land) and I had asked for a photo that “cowboy’s didn’t have smiles back in that day”. So the Little Cowboy with his infectious giggle and round, rosy cheeks will cross his arms, tilt his hat, and straighten his mouth like the weathered, worn cowboys that rode the range.

While the Little Cowboy may be tough in spirit he is still my 5 year old baby boy, apparent when giant tears rolled down his face has he mounted his pony. He remembered his tumble off her when she had put her head down to eat and he was afraid.  His Dad is more patient and knows just what to say to calm his nerves… he asked him to sing one of his favorite songs…

“Sit tall in the saddle. Hold your head up high. Keep your eyes fixed where the trail meets the sky and live like you ain’t afraid to die. And don’t be scared, just enjoy your ride.” 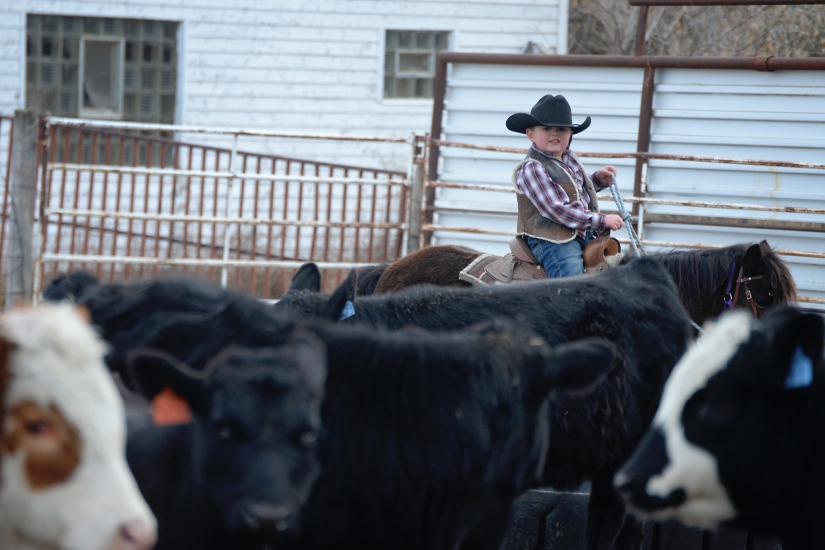 His Dad seemed to know that this Little Cowboy needed a job to distract his fearful mind. So off he went to push heifers out the corral.  As it turned out the photo from this moment was his favorite….the “ONE” that would be shared with his entire classroom. “I need nine of this picture Mom!”

So don’t expect that traditional school picture. Instead you will be getting a photo that truly captures who he sees himself as…a working cowboy mounted on his trusty little pony tending to his stock. It is a picture that could have been taken one hundred years ago and told the same story.

“Photography is a way of feeling, of touching, of loving. What you have caught on film is captured forever…It remembers little things, long after you have forgotten everything.