We love a party and better yet if it is a themed party! So in the spirit of the homesteaders, we thru a Pioneer Party to celebrate the kiddo’s 5th birthday. Friends and family obliged and dug out their pioneer garb to celebrate.

Brad’s great-great grandfather homesteaded our ranch in the late 1800s after his arrival from the Ukraine. We currently live in the fourth home to be built on the homestead and grow much of the same crops and livestock today that were first produced here. By walking the same ground Brad’s family did before, there is a reverence for the land and an importance in carrying on the story and traditions of the generations before us.

Frankly, by living here it sometimes feels like we still live in the pioneer era. I joke they have internet in the jungle and on top a remote mountain but we still don’t have internet on the ranch. I use my cell phone service and we ration “data” just like the pioneers of days before rationed sugar or flour. Neighbors actually live miles away and when something goes down in the ‘neighborhood’ like a fire or downed power line there is a “party line” of phone calls to half the county.

Gorham was a small town just north of the ranch. It was in its heyday around 1937 when 5 families and 5 businesses made up the town, including the Gorham Store and Post Office. The store operated until 1972 when the post office was lost and eventually Gorham became a ghost town. The store building now sits with shelves full just like it did decades ago at the Dickinson Museum Center. So of course our pioneer party needed a General Store. The kiddos were “paid” for doing pioneer work and could use their pennies to “shop” at our General Store.

The first activity was making butter.  You just need cream and some mason jars, patience, and strong arms. The kiddos tired after about 2 shakes so the adults took over but at least there was work was rewarded with homemade fresh butter for the Easter bread and homemade bread made by the Grandmas. 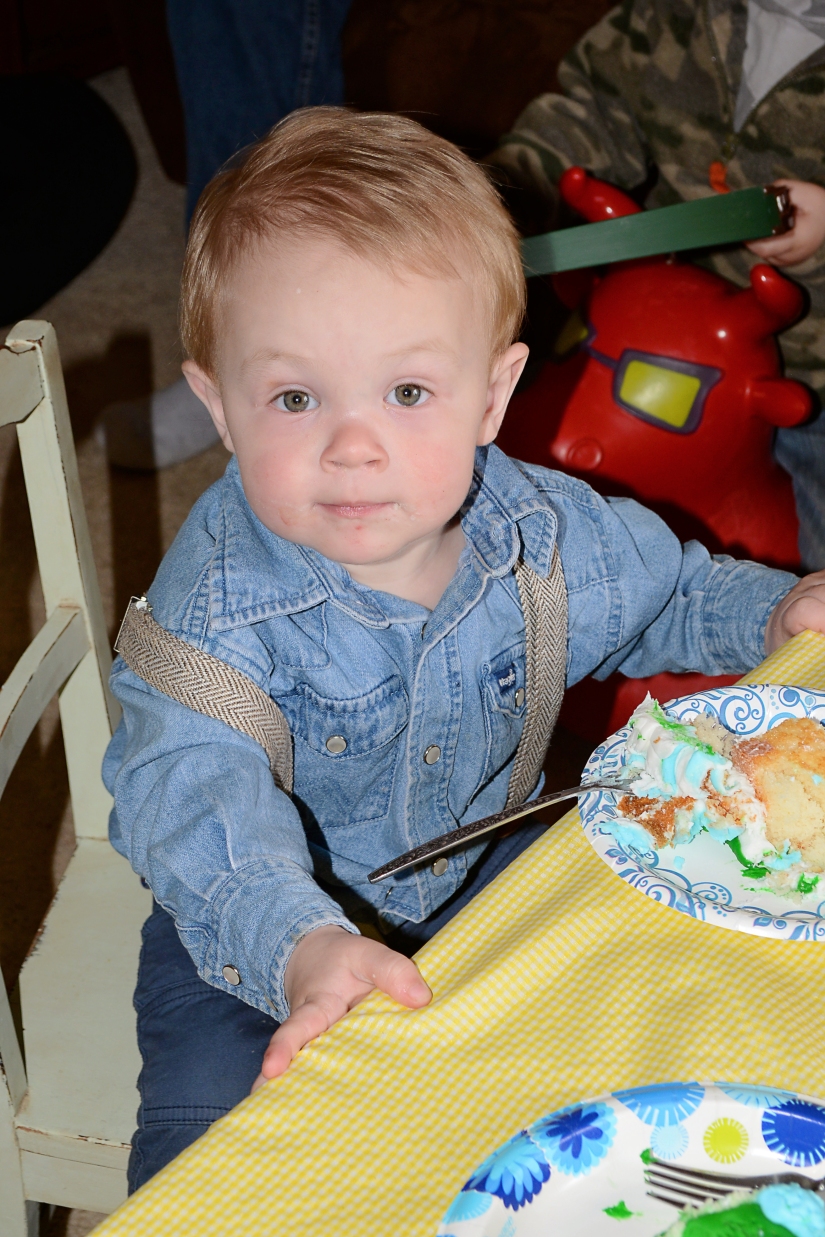 The kiddos then headed outside to collect eggs. The weather was not so agreeable but unlike finding anything lost within the house, they made short order of finding all the eggs.

The next activity was to be handwashing clothes on a washboard. The weather didn’t cooperate and having wet kiddos didn’t seem like such a great idea so that was tabled for another day. Another activity they had planned for was hunting for wild game but the wind and rain kept the party pretty much indoors. Each kiddo received a handmade pioneer journal. We also made spinner toys… I practiced and finally got the hang of it a day later. We used about 36″ of string and some cut wood with two holes drilled in the center. Large buttons would have worked well too. The kiddos weren’t as enamored…honestly there is probably an app for this now days.

Each person receive a “quilt square” (Oriental Trading purchase) and worked together to make a quilt. I was actually surprised how popular this activity was.

We still have an Outhouse but due to weather we allowed everyone to use the indoor plumbing…just kidding. We have had indoor plumbing and electricity for a few decades now but the Outhouse still sits in the yard.

It was great to celebrate a traditional meal with family and friends…ham, scalloped potatoes, corn, homemade breads.

The Kiddo so wanted a hay ride so Brad put a rack together and we tested it out. In typical North Dakota style we experience all four seasons in the 30 minute hay ride…snow, sleet, rain, sun, and rainbows. Everyone was a trooper and we cuddled up under the quilts. Our “farm safari” took us thru the pastures to see the new calves. One thing I didn’t prepare for was the cow that choose to pee next to the trailer with 40mph wind gusts. Cows are large creatures and produce a fair bit of urine. It was a urine shower but worth a good laugh and a memory for sure.

Thanks to all the family and friends that were able to join us to celebrate! It was a great day!